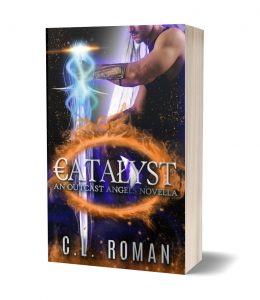 Sometimes the wrong choice is the only one that makes sense.

When Fomor and his angels flee heaven, they seek only peace. Instead, they find a world as violent and restless as the one they left, but the stakes are higher, because here, the price of innocence is death. When the humans they are sworn to protect prove selfish and violent, and a growing evil stalks the land in search of blood, can the seven find a home? Or will their choice lead them to destruction as certainly as the war they tried to avoid? This prequel to the Outcast Angels series introduces the seven angels in a fast-paced, high-stakes journey of discovery.

Escaping heaven was only the beginning.

The nomad band is searching for a home, and they may have found it. When an inescapable evil threatens to destroy them, the humans they fall in love with, and the Earth itself, the angels must choose again. Will they be able to defend the ones they love? Or will the fight cost them everything they hold dear?

Which is more important? Love, or Honor?

Meeting and marrying the love of her life should have been the beginning, but a cataclysm of Earth-shaking proportions changes everything. Adrift in a strange new culture with only her beloved Volot by her side, Shahara’s world unravels.

With her marriage shattered and countless lives hanging in the balance, Shahara must make a devastating choice.  Can she survive her decision, or will victory require the ultimate sacrifice?

Which is Stronger? Love or Duty?

When they are separated by the very force they hoped would save them, Jotun and Gwyneth find a modern world full of unfamiliar faces, advanced technology and secret enemies. Can they unravel the goals of opposing factions, separating truth from illusion in time to save each other and a world that seems bent on self-destruction?

The Map to My Worlds