No Comments on A Revolutionary Heroine With a Sci-Fi Twist by Bria BurtonPosted in Behind the scenes for Readers By clromanPosted on December 6, 2018December 5, 2018Tagged History, Revolutionary War, Sci-fi, unknown heroine

The name Sybil Ludington may not conjure up a daring, sixteen-year-old revolutionary for most Americans today, but I hope that will change. In my short story, “Her Midnight Ride,” featured in The Prometheus Saga Vol. 2, Sybil is the main protagonist fighting for American Independence.

While the story is based on historical facts, the premise of each short story in The Prometheus Saga revolves around the idea that an alien presence is observing humanity throughout history, watching how we evolve over time and intervening when desired. The collected stories are part of a science fiction anthology created by the Alvarium Experiment. 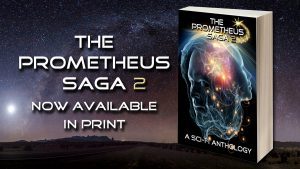 The Prometheus Saga Vol. 2 is available on Amazon

In “Her Midnight Ride,” history dominates and the science fiction is subtly woven in. My goal was to shed light on who Sybil was while telling an entertaining story with a sci-fi twist, but I didn’t want the science fiction aspect to overwhelm the facts. Readers seem to have responded well. The Single Kindle Edition was a #1 New Release on Amazon One-Hour Sci-Fi & Fantasy Short Reads.

While Sybil didn’t have the privilege of being immortalized in a poem by Longfellow like Paul Revere, her midnight ride was no less important, and nearly twice as long.

On April 26, 1777, at nine o’clock at night, a messenger arrived to inform Sybil’s father, Colonel Henry Ludington, that the British were burning patriot military storehouses and patriot homes in Danbury, Connecticut. Ludington’s regiment was scattered throughout two counties, and Sybil rode from her family farm in Fredericksburg, New York (now called Ludingtonville) to alert the militia, who would meet their colonel back at Ludington farm.

Sybil rode through 40 miles of dangerous countryside in a severe thunderstorm. Her horse, Star, is equally heroic as he braved the treacherous landscape at his mistress’s bidding. Sybil had a stick to knock on doors, and it was believed that she fought off a highwayman.

There is progress in terms of Sybil’s increased recognition. Books have been written about her. A large statue commissioned by the Daughters of the Revolution depicts Sybil riding her horse, Star, in Carmel, NY. The inscription below the statue honors her as a Revolutionary War Heroine. A board game was created where players followed Sybil’s route. An episode of Drunk History highlighted her story. She was once honored on a postage stamp. 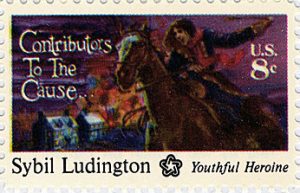 The Alvarium Experiment, a by-invitation-only consortium of outstanding authors, has produced two volumes of The Prometheus Saga, and there will likely be more. My American Revolutionary War story, “On Both Sides,” appeared in Vol. 1. “Her Midnight Ride” is a companion piece.

For further reading on Sybil’s life, I suggest starting with the many websites dedicated to honoring her legacy. One site claims to be her personal blog: www.sybilludingtonblog.weebly.com. It includes a short animated film that aired on PBS Kids TV. And here is an article from Equitrekking that acknowledges her and her amazing horse, Star: www.equitrekking.com/articles/entry/sybil-ludington-and-her-horse-star-heroes-of-the-american-revolution.

Award-winning author Bria Burton lives in St. Pete, FL, with her wonderful husband, darling son, and two wild pets. Her short fiction has appeared in over twenty anthologies, magazine, and podcasts. She is a member of the Alvarium Experiment, a consortium of writers working “independently together” on an anthology of short stories, reinventing the short fiction experience.

A Revolutionary Heroine With a Sci-Fi Twist by Bria Burton