No Comments on Book Review: Outsystem by MD CooperPosted in Our Favorite Authors - For Readers By clromanPosted on October 29, 2017Tagged adventure, feminism, military, Sci-fi, space travel 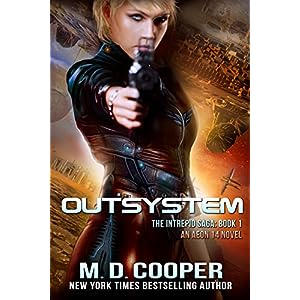 In 4123, the greatest colony ship ever built is leaving the Sol System, and Major Tanis Richards has secured a berth.

Demoted by the military and hung out to dry, the media calls her the Butcher of Toro. However, despite her soiled record, Tanis still one of the best military counterinsurgency officers in the Terran Space Force.

The backers of the colony mission need her to stop the terrorists trying to destroy the GSS Intrepid, while in the final phases of construction at the Mars Outer Shipyards.

Getting the job done will be her ticket out of the Sol system, but Tanis discovers she is up against more than mercenaries and assassins. Major corporations and governments have a vested interest in ensuring the Intrepid never leaves Sol, ultimately pitting Tanis against factions inside her own military.

With few friends left, Tanis will need to fight for her life to get outsystem.

M.D. Cooper’s Outsystem is a fast paced, high tension power ride with vivid, multi-dimensional characters and an intriguing plot line. I was hooked from page one and fully invested by the end of the first chapter.

Full disclosure – I haven’t read sci-fi in a long time. Recently, most of my reads have been fantasy and/or young adult. But Outsystem made me rethink my trajectory. A lot of the reason for that had to do with Cooper’s protagonist, Tanis Richards.

Female characters in sci-fi stories, especially those with a heavy military angle like Outsystem, tend to be either frail princesses waiting to be saved, or hard- – erm, boiled veterans with little or no emotional side. Tanis is different. She is smart, savvy and more than capable of defending herself against the enemy, but Cooper also manages to provide her with a heart. Rather than shoving her into the mold of the male warrior as is so common, Tanis is presented to us as a fully-fledged, multi-faceted character with the same wants and needs of any normal human being.  She has been through rough times, and she carries that baggage, but she doesn’t come across as fragile or weak. Tanis is a hero anyone, male or female, can relate to and appreciate.

For this reason, plus a strong plot and an outstanding supporting cast of characters, Outsystem gets 4.5 of 5 stars. If you enjoy military sci-fi, this is a must-read.

Michael Cooper has been writing since he finished Return of the King and had to have more. Lately, he has turned toward science fiction and is working on a series of books which surround a colony ship leaving the Sol system for 82 Eridani.

When he’s not writing novels or software he can be found spending time with his wife and daughter or in his wood shop building furniture.

You can find out more about Michael and his books here:

The Map to My Worlds